Hung Kuen is one of major branches Chinese Kung Fu created in the 17th Century in the Southern Shaolin Temple by Hung Hei Gwan. Made famous by Grandmaster Wong Fei Hung whose life has been made famous by hundreds of movies made about his life and his student Grandmaster Lam Sai Wing, Hung Kuen is a no nonsense form of self defence that is suitable for men, women and children. The Lam Family has been teaching Hung Kuen for three generations. Grandmasters Lam Chun Chung and Lam Chun Sing continues to pass on the Hung Kuen tradition to future generations in Hong Kong and overseas. 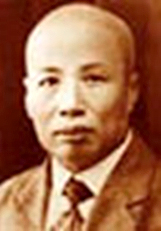 Lam Sai Wing was born in 1860 and lived until 1943. He was widely considered one of the best boxers of his time, and he was certainly one of the most famous. Lam Sai Wing inherited the Hung Kuen style from his Sifu, Wong Fei Hung, and passed it on to his nephew, current grandmaster Lam Cho. Lam Sai Wing retired from teaching kung fu at the age of 65 (1925). He left grandmaster Lam Cho and some other students in charge of his schools to continue teaching the art of Hung Kuen to the general public. Some well-known students of Lam Sai Wing include Kwan Kun, Tam Chou, Tang Yee, Tang Fong, Wu Lap Fung, Wong Man Kai, and Lau Cham. 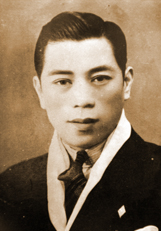 Master Lam Cho is the living legend of Hung Gar. The last of the great masters of his generation, Lam Cho sigung has dedicated his whole life to the research and advancement of Hung Kuen.

Lam Cho, also known as Lam Kwoon Kau was born in 1910 in Ping Chow, a small village in Namhoi district of Kwangtung province. His parents passed away when he was still a young boy. He was adopted and raised by the famous Hung Gar Master Lam Sai Wing who was the top student of the legendary folk hero Wong Fei Hung. Lam Sai Wing could not have children of his own so he loved and raised Lam Cho like his own son, gave him his family name and passed down great bulk of his Hung Gar knowledge. He also taught Lam Cho the traditional art of bone setting and healing, known as dit da in Chinese. After the fall of Ching’s dynasty and in the early days of the Republic, Lam Sai Wing was invited to live and teach in Hong Kong. Master Lam Cho followed his uncle to Hong Kong and made the former British colony his permanent home. Soon after moving to Hong Kong, Lam Sai Wing set up the Southern Martial Physical Culture Association (Nam Mou Taiyuk Wui) where master Lam Cho assisted his uncle by teaching kung fu and eventually took over the school.

As a young man, he was already helping his Sifu in teaching at the Southern Martial Arts Association and eventually set up his own kung fu studio. His skill was so well known, that people though out the South referred to him as Sifu even as a young man. He set up another studio in Kowloon, where thousands of students trained.

His closest students set up studios to teach as well; thus, those who had his teaching spread across Hong Kong and Guangzhou, and the Hung Kuen style became a shining example of excellence in martial arts. Many of Lam Cho's students in turn become well known martial artists and respected figure within the Chinese Martial Arts circles around the world. Some of them have opened up Kung Fu schools of great renown. Grandmaster Lam was well respected and was invited to give demonstrations for the Navy and Army. Both Chinese and foreigners complimented his performance, and his photo was soon appearing in London newspapers. The school of martial arts spread throughout the globe, enhancing the reputation of the Lam family and the Hung Kuen style. Grandmaster Lam traveled far and wide, and never tired of teaching the style his Sifu taught him. He was especially happy and willing to help newcomers to the art. Many of the students that he trained went on to develop great reputations for themselves. All were grateful for his noble deeds, but grandmaster Lam remained humble and peaceful, and was therefore well respected.

When the Japanese invaded Hong Kong, grandmaster Lam’s studio burned down, and fighting broke out all across the city. Grandmaster Lam helped maintain the peace and aided the people in their suffering, and his deeds are still remembered to this day. When Hong Kong fell, the Japanese forces went looking for grandmaster Lam, so he returned in secrecy to his village. When the people of his village heard of his return, they immediately entreated him to teach martial arts. Finally, after Hong Kong was liberated, he returned to Hong Kong and set up his studio. He taught, gave medical care, and served as national martial arts consultant for various unions and workers associations. His medical skill was superb, and his principles were especially admirable; he did not take more from the rich, but nonetheless reduced his fees for the poor, to the point of providing free service and medicine. He was compassionate and generous. He accomplished a great deal in his youth, and still enjoys researching and discussing medicine and martial arts everyday. 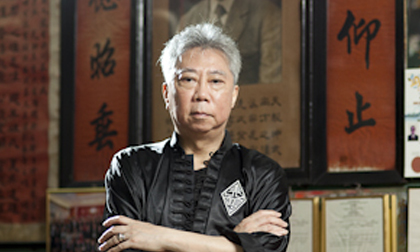 Born in Hong Kong in October 1948, GM Lam Chun Chung, Simon was the third son and the sixth child of GM Lam Cho.  GM Lam started training in the art of Hung Kuen under the watchful eye of his father from the age of 7 years old.  GM Lam had a very close relationship with his father and as a young boy frequently went with his father when he travelled around Hong Kong to observe him teaching students and treating patients.

Having frequently watched his father teach Hung Kuen to his students, GM Lam has tremendous insight into the art of Hung Kuen even from a young age. GM Lam also trained diligently with his brothers and assisted in teaching at his father school from the age of 16. GM Lam also often performed on stage with his brothers. His double dagger vs spear form which he performs with his brother Lam Chun Hin and his Wu Dip Seung Do were big hits with the local audience at the time.

Subsequent to completing his schooling at St Josephs School in Kowloon, GM Lam moved to Macau for work. When he was away from Hong Kong, GM Lam did not teach any students. In 2002, GM Lam competed and was declared the winner in the World Kung Fu Championships in Chongzhou China for his performance of Fu Hok Seung Ying Kuen. In 2004, GM Lam returned from Macau to Hong Kong to assist his father in teaching Hung Kuen at his legendary studio in Macau.

GM Lam is an exceptional master of Gung Fu and a first class teacher. Patient and precise, he is extremely careful and accurate when it comes to teaching and guiding his students. He always takes the time to thoroughly explain what he teaches and encourages his students to train properly and devote the time and energy necessary to become proficient in Hung Kuen. 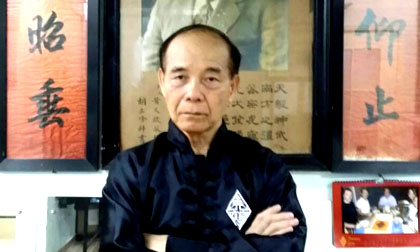 Born in 1943 in Dong Guan in the PRC, Sifu Chan has been practicing and teaching Hung Kuen for more than 30 years. Prior to studying Hung Kuen, Sifu Chan studied Wu Style Tai Chi for a short period of time but was impressed by the power and grace of the Hung Kuen Style. Sifu Chan commenced his training under GM Lam Cho in 1971 and has never looked back since.

Being one of the Senior Student of Lam Cho in his Mong Kok class, Sifu Chan has been helping his younger kung fu brothers and students understand the deeper aspects of Hung Kuen for the past 25 years.

Sifu Chan participated in the World Hung Kuen Championships recently held in Foshan PRC in October 2013 and won the bronze award for his performance of Kwan Do vs Spear with Sifu Benny Wong Hon Keung also of the Mongkok School. He also performed the Yiu Gar Dai Pa at the competition. This is quite an impressive feat given the fact that he is 70 years young and was competing against many contestants that were more than half his age. Sifu Chan's stamina is a demonstration of the effectiveness of Hung Kuen in maintaining health and fitness.

Given his long years of training and teaching directly under GM Lam Cho, Sifu Chan continues to teach and pass on the complete art of Hung Kuen to the future generations. 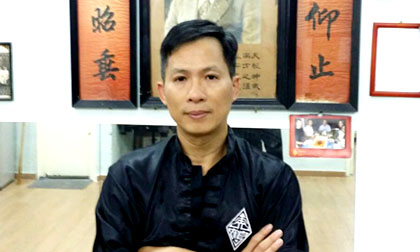 Sifu Wong was born in 1963. When he was six years old, he started learning old style Hung Kuen from his father. From 1973, Sifu Wong commenced studying Chow Gar Kung Fu. He later studied Hung Gar Kung Fu and Hung Gar Sam Chin Kung Fu with Grandmaster Wong So, a student of Great Grandmaster Wong Fei Hung and his wife Mok Kwai Lan and assisted him in teaching from 1980 until the death of Grandmaster Wong So in 1996, a period of almost twenty years.

Sifu Wong participated in the Wong Hung Kuen Championships recently held in Foshan PRC in October 2013 and won the Gold Award for his performance of Seung Long Do. Sifu Wong is currently the Associate Vice Chairman of the World Hung Kuen Association. Sifu Wong was the Deputy Chief Referee and Deputy Director of the Competition Office for the Wong Fei Hung Cup International Hung Kuen Competition held in Foshan in November 2014. As Deputy Chief Referee, Sifu Wong was responsible for management of referees at the competition with more than 200 competitors from all over the World. Given his rich tournament and refereeing experience, Sifu Wong is in a unique position of being able to pass on his knowledge and experience to students." 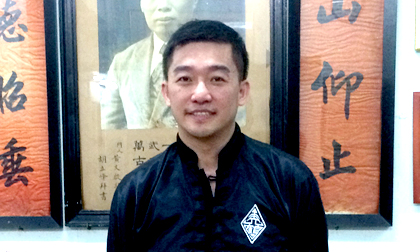 Born on 27 September 1972 in Hong Kong, Vincent Liu commenced studying martial arts at the age of 7 years old he studying Wu Style Tai Chi. He has studied various styles of martial arts including Kyokushin Karate, Northern Shaolin, Xing Yi Kuen and Wing Chun. In 1999, Vincent was awarded his instructor's certificate by the Ving Tsun Athletic Association and taught Wing Chun classes in Canberra, Sydney and Perth in Australia. He was also certified as a Level 1 Coach (Kung Fu) by the Australian Sports Commission.

In 2010, Vincent and his family returned to Hong Kong due to work reasons. Having an interest in Hung Kuen, Vincent commenced training with GM Lam Chun Chung. After 3 years of dedicated training under the watchful eye of GM Lam, in 2014, Vincent was appointed as an Assistant Instructor at the school to assist in teaching Hung Kuen to local and international students.